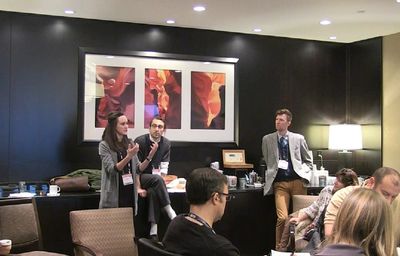 It was 11 a.m. on a Friday in Denver, Colorado, and Philosophy was once again, after 2,400 years, on trial.  Only this time around, instead of Anytus, Meletus and Lycon, Socrates' prosecutors were Philosophy professors.  We held our own mock trial version during "Teaching Core Texts: Plato's Apology," a panel presentation for the American Association of Philosophy Teachers at a session dedicated to teaching Plato's Apology, which was co-sponsored by the APA-Central Division's "Teaching Hub."

It was a fun way to get the room involved. But it was also more than that -- it was an opportunity to share an approach to teaching philosophy that has inspired and challenged us, and that has really taken off with students at our respective institutions. Beyond a discussion of new strategies for teaching Plato's Apology, what my co-panelists and I were really offering was a demonstration of the Philosophy as a Way of Life approach to teaching philosophy.

I presented with a group of outstanding teacher-scholars whom I met in 2017 at the National Endowment of the Humanities Summer Seminar on "Philosophy as a Way of Life" at Wesleyan University, which will now be hosted by the Mellon Foundation.  At the NEH seminar, organized by Meghan Sullivan from the University of Notre Dame and "The Stephens" -- Stephen Grimm from Fordham University and Stephen Angle from Wesleyan University -- about 30 scholars gathered for an intensive two-week study of Philosophy as a Way of Life, inspired, in part, by Pierre Hadot. This led to a unique pedagogical approach to experiential learning in the philosophy classroom that is now gaining ground across the country. (I also recently read a paper on PhiLife at the Association of Core Texts and Courses (ACTC), and there was a lot of interest in the approach.)

Our presentation was a collaboration of seven scholars: besides the inimitable Jane Drexler (Salt Lake Community College), who lead the planning and organization, our panel included Caleb Cohoe (Metropolitan State University of Denver), Jacob Stump (Northeastern University), Marisa Diaz-Waian (Founder and Director of Merlin CCC), Ryan Johnson (Elon University) and Allison Krile Thornton (University of South Alabama).  After quick introductions, we moved to our trial, which was followed by several very brief presentations of teaching practices (a lightning round).  A fuller explanation of the approach as an expression of the spirit of Hellenistic thought, followed by some old-fashioned Q&A, brought the presentation to a close.

How does Philosophy as a Way of Life play out in the classroom?  My take is that PWOL does not replace reading and discussion, the real anchors of the study of the core texts, but enhances these practices by allowing students to engage with the ideas experientially.  So, for example, one might have students stage a mock trial as we did, or write an "apology" as part of, or preparation for, the study of Plato's Apology.  In my own classes, I have had success with having students imitate Book I of Marcus Aurelius’ Meditations.  Experiential learning is about reading the text, applying it, practicing philosophy.  More recently, I have had them engage in Socratic dialogue with their colleagues, which ended up being a lot of fun, as well as effective--and after all, Socrates might well be considered a model for philosophy as a way of life.