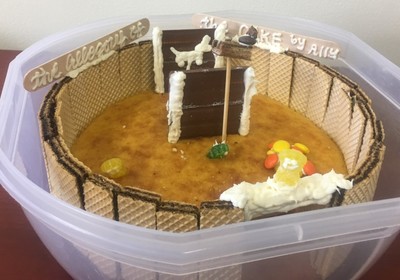 The Allegory of the Cake

I write this piece as part of a group of philosophers dedicated to the concept of philosophy as a way of life and working to raise the bar for teaching philosophy. This is not just about giving more time and attention to teaching, the way “teaching” is currently done in universities. It is also about trying new things. As part of this, I have been experimenting with new kinds of assignments that can make the teaching of philosophy into something both more valuable for students, and more potentially useful to society at the same time. My goal with these assignments has been to connect with themes and questions that manage to be both universal and personal for the students, rather than highly specialized themes and questions of academic research. In this post, I will give you a snapshot of three specific classroom-tested practices I have worked with, aiming to expand the relevance and power of traditional classroom topics and texts in philosophy.

The first is a simple reflection piece. I invite students at the end of the semester to pick the reading from the course that they found most personally significant. They are asked to not only explain why the text was personally significant, but also to share how they would “carry its spirit” forward. Would they read the work from which it is excerpted in its entirety? Would they share its ideas with family or friends? How would they change their daily lives in light of that reading? Of course, this assignment is not terribly original in conception. But it is worth a significant portion of my students’ final grades (15% in my Introduction to Philosophy). I consider the final reflection piece to be more than a feel-good add-on during the last lecture, one designed for students to understand that they have done something more than rehash arguments covered in class. It requires serious work. But it is also heartwarming work for them—and for me. Never have I enjoyed grading as much as I have when it comes to evaluating the final reflection pieces! I love to hear what in philosophy captured their hearts and what they find worth carrying forward in their lives. Last semester, many of my students wrote their final reflection pieces on a petition by Sheila Watt-Cloutier which argued that the United States bore responsibility for violating Inuit human rights because of its greenhouse gas emissions. This text struck a chord, since so many young adults, especially my students in low-lying Miami, take climate change seriously and are concerned for their futures. Those who wrote about this text were inspired to live in more environmentally responsible ways and to engage in climate activism. 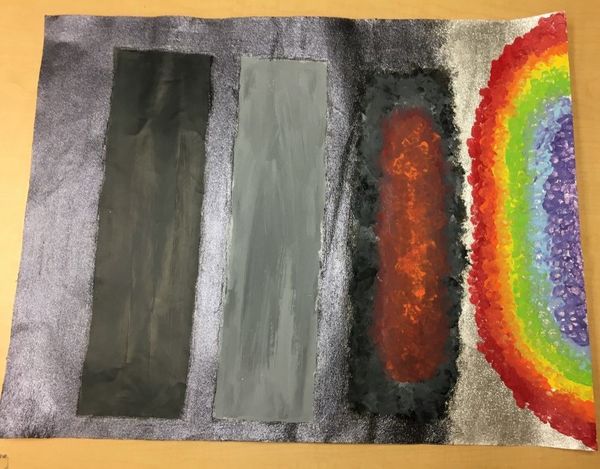 A student's depiction of Plato's Cave

The second is a creative project. My students can write a poem or short story, create a comic strip, poster, or painting, or compose a song or instrumental score, so long as it is related to the course material. Transfiguring a philosophical idea into a medium other than theory forces them to make this idea their own. They must absorb, play with, and communicate its message in a new form. Last semester, a student took the metaphors of rumination and digestion (dear to some philosophers) to heart and surprised us all by baking an “Allegory of the Cake.” Her cake depicted the Allegory of the Cave—with the cave made of cake and with figures created out of candy, one of whom is escaping past the famous parapet. This semester, another student offered a different take on The Allegory of the Cave; her depiction was not realist in style, as many representations are. Rather, her painting, made from acrylic paint, mod podge, and glitter, consisted in two rectangles and two ovals in gradients of color: the rectangles were dark and symbolized the darkness of the cave, the ignorance of those who dwell in it, while the swirls, in progressively brighter colors, separated from the rectangles by light glitter, represented the state of enlightenment of those who attain true knowledge as well as their ability to “think outside the box.”

My favorite assignment, though, has been the “immersive experience essay” that I give after we have covered the Nicomachean Ethics in Introduction to Philosophy. Adapted from Tushar Irani’s assignment on Aristotle in his “Live Like a Philosopher” course, I ask that my students develop either the virtue of temperance or courage over two weeks. They then hand in a written piece describing their chosen virtue and three of the actions that they performed to cultivate it. In addition, they must weigh in on whether they find Aristotle’s method of habituation a worthy idea for acquiring strength of character and, ultimately, for being happy. Many of my students have conquered addictions to fast food, video games, or social media, while others have overcome their fears of snakes, driving in Miami (a significant feat!), or public speaking. From their reports, my students love this assignment, and I also see this from the number of creative projects and reflection pieces that return to Aristotle at the end of the semester.

As this academic year comes to a close, I hope that this year’s crop of students will leave my classroom with more than stronger writing and critical thinking skills. My ambition has been for them to be better equipped to live fuller, more meaningful—dare I say?—happier lives.

What have these changes meant for me? To begin, I have been inspired by and emulated many of my students’ experiments in temperance. I eat less chocolate. I spend less time on my phone. I have also recommitted to writing a blog where I expound the personal significance of many of my favorite philosophical concepts (www.ccleboeuf.com): there, I will be posting “final reflection pieces” weekly. Furthermore, I am writing fiction that deals with Thoreau’s Walden and environmental ethics—much like my students who turn to fiction for their creative projects. In a way, my personal changes instantiate the cliché that you learn as much from teaching as your students do. Yet, it is not that I have thought more deeply about the course material—as the cliché is usually taken to express—but rather that I have begun embodying philosophy as a way of life. I have progressed from merely extolling the virtues of reviving this idea, to putting it into practice. And I would not have gone so far in doing so had it not been for the changes in my teaching this year.