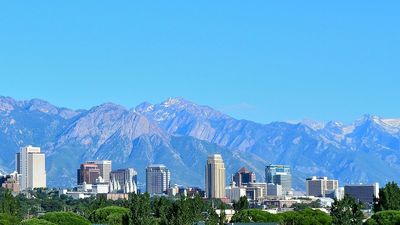 This semester, Professor Jane Drexler of Salt Lake Community College, a member of the PhiLife network, is teaching her regular course on Philosophy as a Way of Life. Since I'm in Salt Lake for the semester, I got in touch with Jane to learn more about her course and about the work that her students are doing.

Both Jane and I believe that the history of philosophy matters not only as a field of study in its own right but also as a prerequisite for understanding philosophical arguments in the first place. Unfortunately, many undergraduate philosophy courses of the historical survey variety give short shrift to work from the Middle Ages. Jane and I figure that her students deserve better, so we came up with a plan to introduce them to St. Augustine and St. Thomas Aquinas in hopes of demonstrating the continuity of the philosophical tradition from Plato through Aquinas.

To that end, I visited Jane's class to lecture on (i) Aristotle's conception of human nature as developed in the De Anima, (ii) the ways in which Augustine and Aquinas modified and assimilated different aspects of Aristotle's conception, and (iii) the ways in which Aristotle and Aquinas regimented, while preserving, the dialectical method that they inherited from Socrates via Plato. I returned for a second class period to discuss Aquinas's five arguments for the existence of God, the Five Ways.

In keeping with her regular pedagogical method, Jane devised an in-class workshop activity for her students that required them first to fill in an outline of the article from the Summa Theologiae that features the Five Ways and then to select their own question to answer using Aquinas's format: (i) the question to be answered, (ii) the (reputable) responses to the question (and arguments for them) that will ultimately be rejected, (iii) one's own response to the question, along with positive arguments for it, and (iv) responses to the opposing reputable responses already listed. The questions from which students could select their own ranged over such topics as one's choice of major in college, the relative desirability of living during some past and future time periods rather than others, and the Trolley Problem. This latter activity, which students will finish up on their own, provides them with a hands-on way into philosophy of a sort exemplified by the work of Aquinas.

I want to thank Jane for including me in these activities. We both enjoyed introducing students to some of the medieval philosophy that is often left out of undergraduate courses.