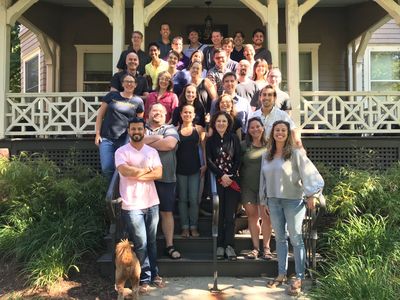 This past summer, some of our Network members participated in a two-week NEH Institute that also explores PWOL applications in contemporary universities.  This group was instrumental in creating the vision for this site.  Celine Leboeuf, an assistant professor at Florida International University and Mellon affiliate, wrote this reflection on her experience with the NEH Institute.

Reviving Philosophy as a Way of Life

The idea that philosophy was a “way of life” in antiquity has become a familiar theme in recent years. For instance, writing from the 1980s through the 2000s, the French philosopher Pierre Hadot advanced the idea that for ancient philosophers, philosophy was a way of life, or an art of living—rather than theories that do not make demands on how we live our lives. More specifically, the different ancient philosophical schools formulated what Hadot called “spiritual exercises” as a way of learning how to lead a good life. Spiritual exercises, for him, were practices that are engaged in to develop specific attitudes and behaviors that empower a person to understand and manage life events as best as possible, rather than to be overwhelmed by them. A great example of a spiritual practice is the Stoic exercise of describing the negative events that might befall oneself in order to better anticipate misfortunes. But my favorite is the exercise of “physical description,” according to which the philosopher is to describe a thing or process with as much objectivity as possible. In his Meditations, Marcus Aurelius uses this exercise to describe sex as “friction with a spurt of mucus ejected.” However amused we may be by this description, it is supposed to help us to perceive things for what they are and not become too attached to them.

The conception of philosophy as a way of life first caught my attention in 2007, during my senior year of college, when I first encountered Hadot’s work. My education up to that point was primarily theoretical. My teachers did not explicitly describe philosophy as a discipline that could constitute an art of living. It was only by accident that I came across the idea of philosophy as a way of life: as the Editor-in-Chief of the Harvard Review of Philosophy, I was responsible for leading a discussion group on the topic: “What is philosophy?” A fellow member of the Review  suggested that we read an excerpt from Hadot’s What Is Ancient Philosophy? This reading made me reconsider what I was doing as a philosopher and encouraged me to conceive of philosophy as a discipline that could not only theorize about reality, but also shape one’s life. Reading Hadot was fortuitous, for I had become weary of a purely theoretical understanding of philosophy and I worried that I had done little more than “rehash” the arguments of influential philosophers during my studies. I was so passionate about the possibility that philosophy could be a way of life that I was inspired to go to graduate school.

The institute was my first opportunity to meet likeminded teachers who share my passion for reviving philosophy as a way of life. We spent hours discussing philosophies that styled themselves as ways of life: Confucianism, Buddhism, Stoicism, Skepticism, Kantianism, and Existentialism. But in the spirit of philosophy as a way of life, we did not stop there: while we delved into theories of the good life, we also debated how to teach these schools in a way that would capture the minds and hearts of those new to the field. In fact, the bulk of our discussions—I’d estimate two thirds of our time—concerned philosophical pedagogy. I was deeply impressed by the innovative ideas so many of my peers had already embraced: I learned about everything from complex reenactments of important historical debates (for example, the birth of Athenian democracy) to immersive writing exercises that require students to journal about living like a Stoic or an Epicurean—not to mention creative assignments, such as rewriting existentialist literature from new perspectives (think Kamel Daoud’s rewriting of Camus’ The Stranger  from the point of view of the dead Arab’s brother).
​
If some of us feel compelled to revive philosophy as a way of life, it must be that we sense that something is lacking in the discipline today. For the most part, we teach theories, but we do not practice them. This is neither interesting for us, nor exciting for our students (as I learned from the primarily theoretical instruction I received as an undergraduate). As Thoreau quipped, “There are nowadays professors of philosophy, but not philosophers.” Yet, if I have learned anything from this institute, it is that there is a growing minority of teachers who will not limit themselves to discussing the problems of philosophy. Even if they might shy from admitting this, they aspire to become more than professors of philosophy.

In Plato’s Symposium, Diotima describes love as the child of poverty and resource. We who strive to revive philosophy as a way of life do so out a deep love of the discipline: we behold how impoverished philosophy has become and we are resourceful at bringing rich ideas for its future to the table.